By Alla Tsybulskaya
…Dear Madam, you told, that president Putin never cancelled your requests. Who, for God's sake, in the world can cancel something what you ask about? However, what is going in fact? …In Russia even intelligent people accustom to pet's tragedy in the streets. Country, which won over fascism, now achieved features of heartless cruelty. President Putin does not care.
_____________________
Photo
Bridgit Bardo
Копировать ссылку Отправить в email 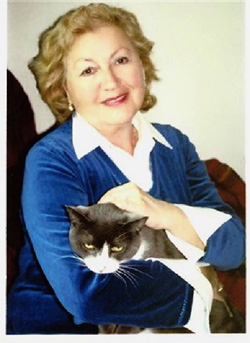 Unfortunately, I don't know French. But I believe, that you know international language - English.There were many times in my life, when I was full of desire to write you. However, I stopped myself. The reasons, that I have the same feelings toward unprotected animal and home pets did not seem to me enough appropriate. I have read your autobiographical book, in which so much places devoted to those creatures, who are less from others in the world protected.

I did not dare to sent you the words of gratitude for your beautiful heart.

But now something happened, you told a few words, which echoed in the world.I guess, that being extremely upset by situation with two elephants, you don't realize that you are under power of your illusions about justice and compassion toward animals in Russia. And I have duty to warn you in order to take off your rose colored glasses. Because your disappointment would be painful.

You are looking for humanity in the country, where that ephemeral subject does not exist.

You are the mega movie star, who evoked admiration from millions people.

Let me introduce myself. I am almost unknown woman, the theater journalist, whose reviews and interviews have been read by a very few people. However, in my heart also knocks trouble, pain, helpless of innocent animals.Compassion is a sign of human ability.

Well-known Russian journalist Julia Latynina wrote to you opened letter about cruelty of President Putin toward the relic animals. Russian advocate of homeless pets Olga Kykunova wrote you about awful situation with home pets in Russia.

I would like to join my voice to them and tell you about tragic fate of home pets in contemporary time in Russia.

In the periods, when mankind experiences difficulties, the animals, especial, home pets become the first victims.

As a witness of period in Russia from1990 to 1995 years I can tell you about horrifying pictures of sufferings, which fell on the heads of throwing away home pets. That was period of economical destruction, and population of Russia started to be involved in poverty. If you are poor, and you have a heart, you will share your piece of bread with your four legs friend.

While people discussed and argued the Human Rights, and their situation, first victims, home pets, unfortunately, without any pity were thrown away.

Can you, dear madam Bardo, imagine what does it mean in the north country?
Misfortune hungry suffering from cold creatures started to collect together as flocks near station of metro, where closer to the doors, where little bit warmer. And passengers could read in their eyes silent beg of food and help. Not so many people could answer them by care.

I was in those time a resident of Moscow. Every my day was started with feeding homeless pets in the yard of the building, where I had been lived. However, it was a small drop. I was not an organization, I was just a one not wealthy person. What had I do with that disaster?

What was extremely sad, that there were not organizations for help to pet in the streets at all. There were not shelters, there were not veterinarian help. Instead  Government was practiced and that awful practice continues, dog's by barbarian way caught by dog hunters with iron hearts and then killed very cruel.

While standing in long lines in the stores for usual products of food, I was begging heaven to take me away from here. Not because I lead bad life, I thought that I shared my fate with my people, but because I was not able to outlive picture of so many sufferings of poor silent creatures… Among them were high breed dogs and mongrels. And I loved them equal.

Now I am living in America. I can't say, that in that great country is everything good with home pets. For example, the prices for veterinarian help are so high, that only wealthy people can pay for medical help for their small friends.
However, America established a lot of shelters for animals, where they can have roof, food, veterinarian help. Even in the case of necessity sending animal to sleep this is performs painful. People can be upset, that life of charming creature stopped. Care for those creatures is fact of American life. Cruelty can be seldom cases. Mostly people treat their pet with love.

I visit time to time my native land. I love it. I highly value theater art in Russia. My last visit Moscow and Russia was in October of 2012.

Did something changed with pets? No! They fulfilled streets, they don't have place to live in, they absolutely unprotected against heartless people. People without any reasons with unexplained viciousness shot them, pierces their eyes, pour iced water on their backs… And there is no punishment for cruelty, and there is no help for poor victims. That a huge problem for Russia, whose people were always considered as kind and pitiful. And simultaneously, that is a huge problem of Government, which does not care of those innocent victims.

What did happen with people in the heart of Russia?

And you even can not imagine what going on with that problem in Province!
Poor dogs die from starvation and cold. Is it possible in civilized country?

Only separate people try to help animals, but individuals can not decide the problem. In the Russian movie, directed by Eldar Ryazanov, "Heaven blessed" the last episode grow up in the great metaphor: homeless people with escort of vanished dogs fly to the air, to the clouds, to the heaven. It is only one way to be saved: to escape.

Dear Madam, you told, that president Putin never rejected your requests. Who, for God's sake, in the world can reject something what you ask about?
However, what is going on in fact?

Above all my great impressions in Moscow's theaters I can not forget those pets, whom I met in the streets in miserable condition.

Now Russia is not a country, where you will meet humanity towards animal. Your struggle for life of animal should develop in other places of earth. And might be you persuade your Government to save lives of your two protegees.

Until people will not understand, that should not put themselves in the position higher, than animals, that before the face of sufferings they are equal, that blood of one color- red- is running in human and in our four legs small brothers 's veins, we don't have hope for compassion.

In Russia even intelligent people accustom to pet's tragedy in the streets.
Country, which won over fascism, now achieved features of heartless cruelty.
President Putin does not care.

My Russian and English version of letter is little bit different, but one adds to another something else. And what I wrote in both - is less than I would like to describe. I saw too much tragedies.